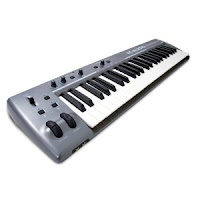 I had actually given up on my Keystudio 49 since M-Audio does not support those (since Mavericks) and since they did not work in Mavericks and Yosemite.

For some reason while browsing the classifieds for a new sound module and/or keyboard-controller I plugged it in and fired up Mainstage 3 and... Voila - works like a charm. It seems that the USB class driver somehow shaked off some flaws.

I can't say whether this is a general thing or just my Mac's combination of up and downgrades, emergency hotfixes etc.

But I encourage anyone having stowed a Keystudio 49i away to give it one more go on Mac OS X El Capitan.

UPDATE: under OSX Sierra the Keystudio49i is totally useless again. The Midi part does transmit to my DAW/Garageband, but the audio part interferes with what efter audio driver I'm using (Scarlett or Apple Core) and causes crashes. So Keystudio 49i is dismissed from my desk once again.
Indsendt af Henrik Bay kl. mandag, november 02, 2015